VSCode Pharo is an extension that enables the support of the Pharo programming language in Visual Studio Code.

This page is announcing the creation of the extension, it might not be up-to-date. Please see the GitHub repository for more information.

Five steps are required to install the plugins.

We present here the existing features 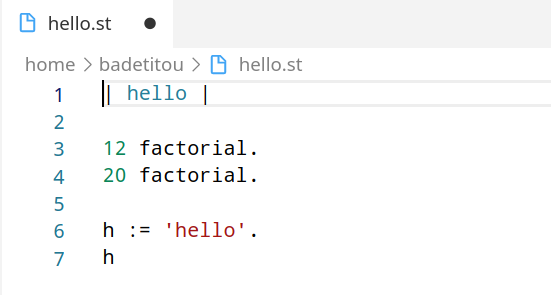 When moving a cursor over a class, it shows the comment of the class. The hover popup supports markdown. So it can be use to print nice comment from Pharo 9. 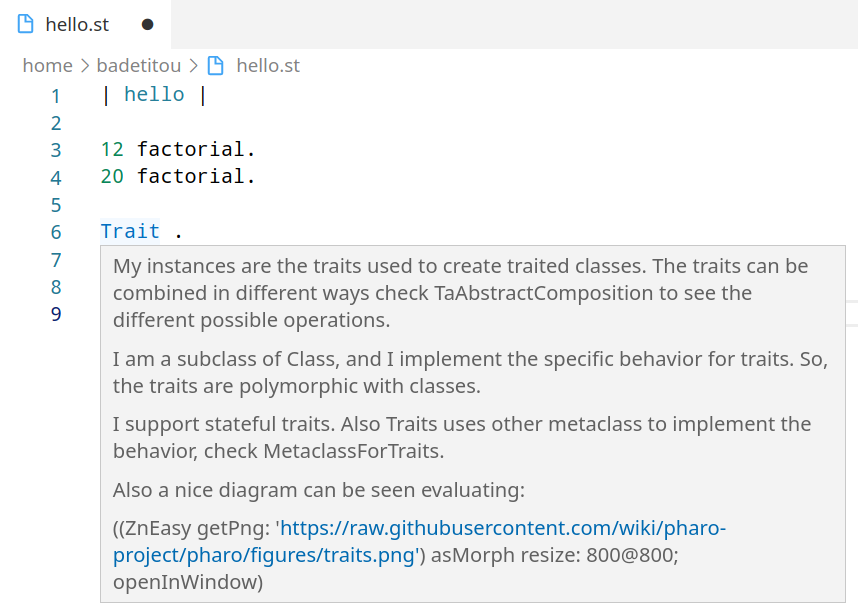 We used the completion engine of Pharo to compute the entries. Not that for keywords with several symbols, it is possible to use the <Tab> key to move from one argument to another.

Three major features are coming (and will require time).

We plan to add commands to VSCode to allow synchronization between Pharo and VSCode. The idea is to be able to install a set of classes from the VSCode editor inside the opened Pharo Image. A typical use case is then:

Another possibility will be to synchronize a project already present in the image with a ongoing VSCode session. A typical use case is then:

Debug Adapter Protocol (DAP) is a generic protocol that can be used to control debugger. We plan to add support of the DAP over our extension. With this extension, it will be possible to debug Pharo application using several editors (VSCode, Emacs, Vim, Eclipse, …).

VSCode is currently testing a Notebook feature (as Jupyter). We already have most of the required material to implement a Pharo Notebook using the VSCode API. This will be our priority as soon as the stable VSCode notebook API will be released.

I spent this year writing my Ph.D., obtaining it, migrating several applications @Berger-Levrault, and… Playing...

How to use VSCode and Moose to analyse Java projects?

Description of the Language Server Protocol for Pharo